As tempting as it is to dive headfirst into wiring Tony Boy's new instrument panel to coincide with all the learning and GRT EFIS documentation-creation I'm doing at work, this tail kit just really needs to be done. It's going on THREE YEARS now! Granted, a lot has happened, including a tornado, two cross-country moves and the rebuilding of two wings and a rear fuselage. But seriously, it's time to be done with the tail.

I finished up the rudder a few weeks ago. It's not perfect, but it's straight and miraculously dent-free. I say "miraculously" because it's my first control surface made of featherlight .016 sheet metal, and it survived inside a trailer from Yakima Washington all the way to Michigan. 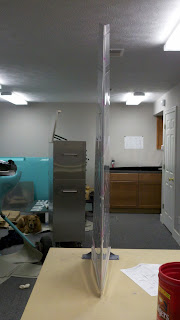 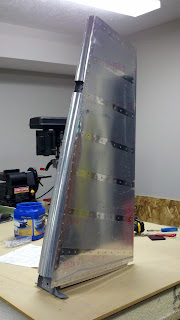 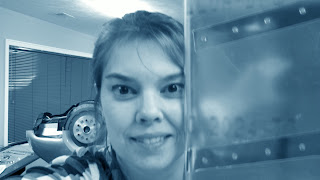 The elevators are built the same way as the rudder. Draw out the location of the spar on the skin blank, then build on that location to figure the location of the stiffeners, ribs and, in the case of the left elevator, the trim tab. The right elevator was easy, I drew that out in half an hour. The left one caused me some trouble. The dimensions just didn't add up. After drawing the spar, then the trim tab spar and stiffeners, my trim tab cutout would only be 17" long, a quarter inch short of what is shown on the plans. I tried probably half a dozen times to get it right, then asked Ben what in the hell I was doing wrong, thinking he'd see something simple and call me a "crackhead" for missing it. He looked at it, measured some things, and said very quickly, "Let me draw it in CAD and see what happens. If Van's sketch is wrong, we'll find it." So he did. He plotted out all the lines & dimensions given, and when he measured the distance from the edge of the skin to the bend line on the outboard end of the trim tab, the computer came up with 17" for the trim tab opening. HA, I was NOT a crackhead after all. 17 inches, so be it. Build on. 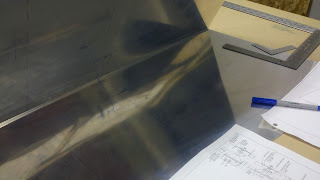 I had to make stiffeners from raw stock because I used up half of my elevator stiffener stock to remake my messed up rudder back in July. I have to admit, when builders of pre-punched kits complain on VAF about their stiffeners not lining up right or they can't figure out how they go together, I laugh silently to myself. I laugh because they are so easy to make from scratch. See? 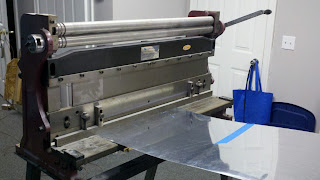 First you shear the .025 sheet into 1" strips to make them 1/2" tall, and thus you may trim them to the angle depicted on the plans. The kit includes 5/8" tall stiffeners that can bottom out when you try to bend the trailing edge of the skin, so making them 1/2" tall avoids all that ugliness. See, you're ahead of the game already by scratch-building. 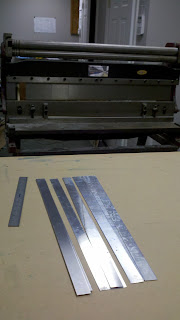 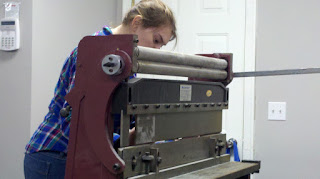 Then you set up the brake to smash the strips into angle stock. 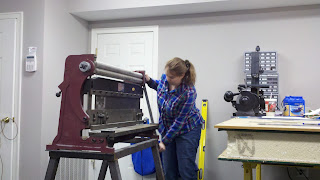 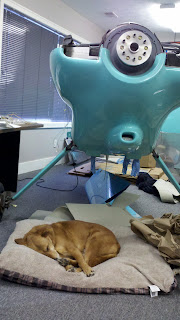 And then your dog falls asleep because you're so boring. 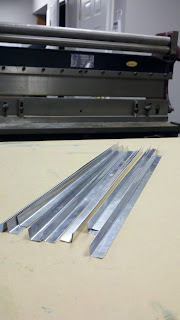 And then you measure out how long each one is supposed to be, trim it off to length, pick out the ugliest end, and measure & draw the angle at the trailing edge so you can cut it to final shape with the band saw. 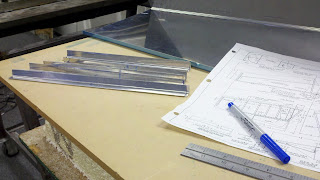 Then you file as necessary. There, now you're ready to measure out, mark & drill the rivet holes. And then you realize that those guys crying about their stiffeners not lining up have had enough time to go on VAF, post a question, get a response, fix their problem, put all their stiffeners in place and backrivet them on during the amount of time it took for you to make your stiffeners from scratch. :-)